Your users have 3 brains, why do you keep ignoring them?

Your users have 3 brains, why do you keep ignoring them?

The more I learned about business, sales, and dealing with people, the more I started to wonder about how things impacted our subconscious. Lately I have become fascinated about our primitive roots. Not many people realize that a majority of what we do can be explained by looking back on what we have always done. It seems like a perfect fit to start by discussing the first brain, the old brain, that controls what we do. The old brain impacts us the most subtly. It is in charge of our survival. Fully aware of opportunities related to hunger, danger, sex, and belonging. The next time you watch something on TV pay closer attention to how the women are dressed. It isn’t a mistake that 80% of them are revealing their cleavage. The same goes for food, pay attention to how the photos have been done in magazines and how it is displayed on TV. These are some of the things that catch our attention even if we aren’t fully aware of it. Take Google +‘s sparks feature on recipes: 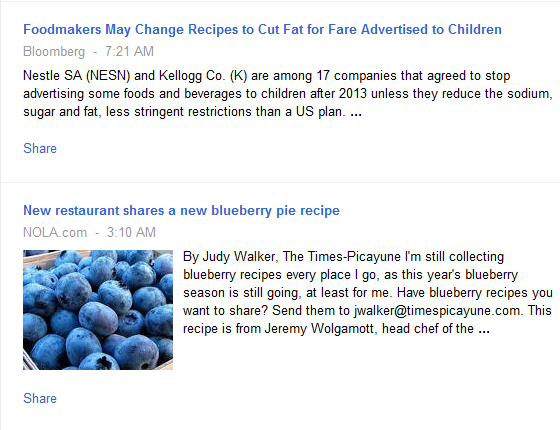 Notice how your eyes immediately go to the food? Sure there are other factors like contrast and the fact that there is a picture vs there isn’t. Yet several sites continue to make that mistake of talking about food rather than showing food first.

The second brain that influences a majority of our decisions is the mid brain, better known as the irrational or emotional brain. Terms like reciprocity, concession, conformity, and gambling fit in this category.

Reciprocity- is the feeling of indebtness after someone does something for you. Remember the last time your friend did you a favor? Brought you lunch? Retrieved something important that you forgot about? Remember that feeling that came immediately after they did it and you just said “Thank you.” Thank you didn’t feel like it did the trick did it? That is reciprocity coming into play and not many people realize how big of an impact it has on them. There was an experiment done where two people in a room were taking a test. The instructor gave them a 10 minute break and during this break, a test taker named Jim brought back 2 sodas and handed one to the other test taker. 20 minutes later they had another break and Jim asks if Bob would like to purchase a raffle ticket. Turns out that if Jim offered Bob a soda prior to asking him to purchase a raffle ticket, Bob was two times more likely to purchase one. Reciprocity can be seen with email/mail marketing campaigns, holiday cards, remembering someones name when they have forgotten yours, and simply helping someone in anyway without them ever asking for it.

Concession – is asking for a favor well above what most people would agree too only to have your second request to come across as much more reasonable and well received. This is commonly seen in negotiations, volunteer requests, and fundraising. Fundamentally people do not like to say “no.” Humans are at their core non confrontational. This is an evolutionary trait ingrained in us for survival. That is why that girl gave you her number and never returned your call after 46 tries leaving you crying yourself to sleep at night questioning the world being fair and … we should move on to the third and final brain.

The last, latest, and greatest brain, the third brain, the new brain is one full of rationality. It is the one that questions what is real, if your old and mid brain are tricking you into making too hastily a decision and if what you are about to do is truly what you want. It questions if reviews are actually real, if people are using the product, or if the product will enhance your life. Unfortunately, the old and mid brain are so powerful it still is very easy to trick. There was an experiment done at a restaurant that served a 3 course meal with a complementary glass of wine prior to it. The experimenters took 2 bottles of the same wine but labeled them differently. One was from the beautiful vineyards of California and the other from Nebraska’s vineyards. After people drank their wine and ate their meals they each took a survey. The results were astonishing. A majority of people who drank the “Nebraska” wine before their meal found the meal to be “not that good.” More people also when asked to guess the price of the meal undershot it if they drank the “Nebraska” wine. Where as a majority of the people who drank from the “California” wine found the meal to be quite up to standards, and stated that they definitely would come again.

Overall there are a lot of little things that impact how we make decisions or experience different products. Try to be more aware of your surroundings and how simple opinions can make a world of a difference in how someone perceives your product.